It is sadly the last day of the reunion. We started, of course, with a Swedish breakfast. Then there was the closing ceremonies, and the reunion banner was passed off to the new planning committee. In three years the reunion will be in Saskatchewan. 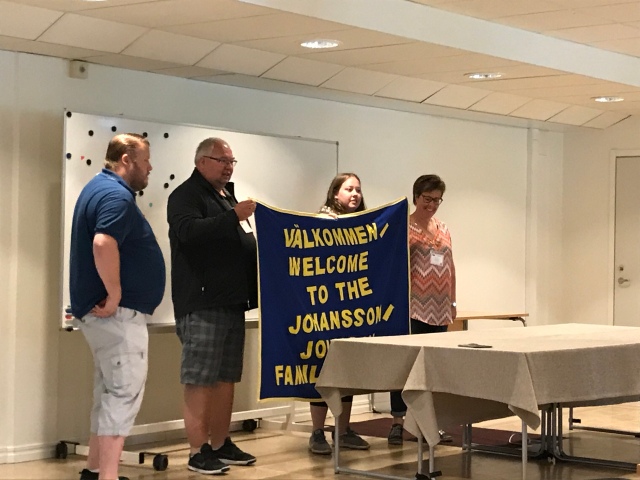 After there is Dan who lives near Seattle visiting with his sister and cousins who live in Sweden.

This is a whiteboard that the children drew on during the reunion.

Then we started the tour of Johansson sites. The first that we drove by though is listed as a home of Carl Zingmark. He was my GGGG grandfather. I am not sure if this building was his or not though.

This is the barn that is in front of the property that Jakob Johansson and his wife Ester Amalia Zingmark has a farm. It may be that some of these timbers were from their buildings. But I love the design of the barn’s ramp. I think we need one of these for our barn. 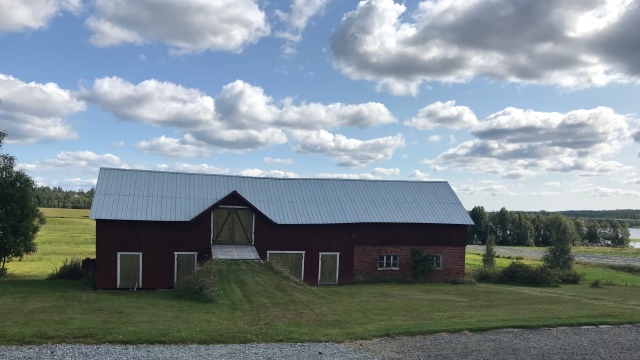 Then we walked a ways back. This is what I called the brain trust leading us. They keep the family information. It is Ann-Brith, Cecilia and Gull-Britt.

The view of the lake is gorgeous. Manghild was one of the early grandchildren of Johan and Ester and had a cabin on the opposite side of the lake that could be reach by row boat. 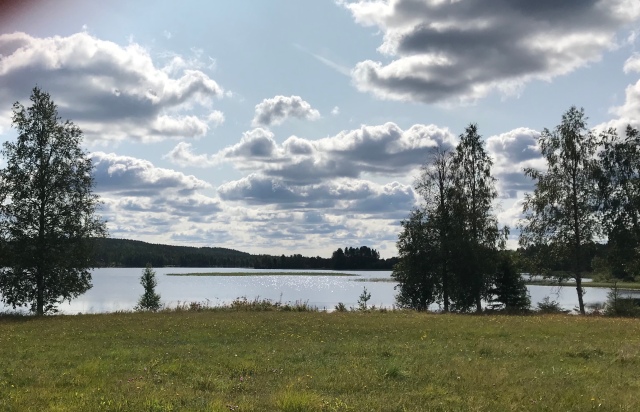 This is the mixture of trees on the property. Birth is prominent. 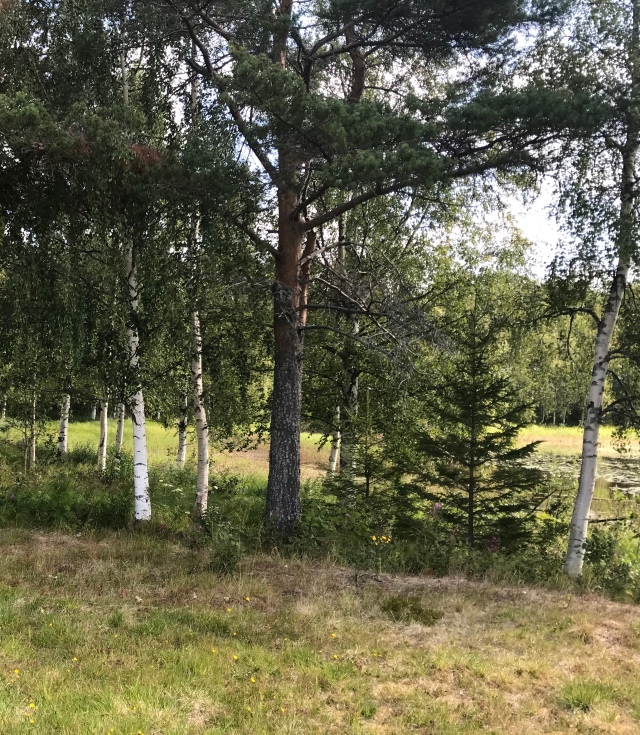 This is the site of the house.

And this is the site of the barn. In our family this barn is ominous because Ester and her son Knut died of the Spanish flu in January 1919. The ground was too frozen for a burial so their bodies stayed in the barn until the spring. In the meantime the surviving and remaining children had to keep the vermin away ( Axel had already died of the flu in September).

There was some equipment and the barns ramps still evident (with Cennert demonstrating).

Here is my more immediate family minus my mother. It is Christina, Keith, Amy and Craig. And it is the latter two’s 40th wedding anniversary today.

This is the home back at the road. Apparently the timbers from Johan’s house were used to build this home. 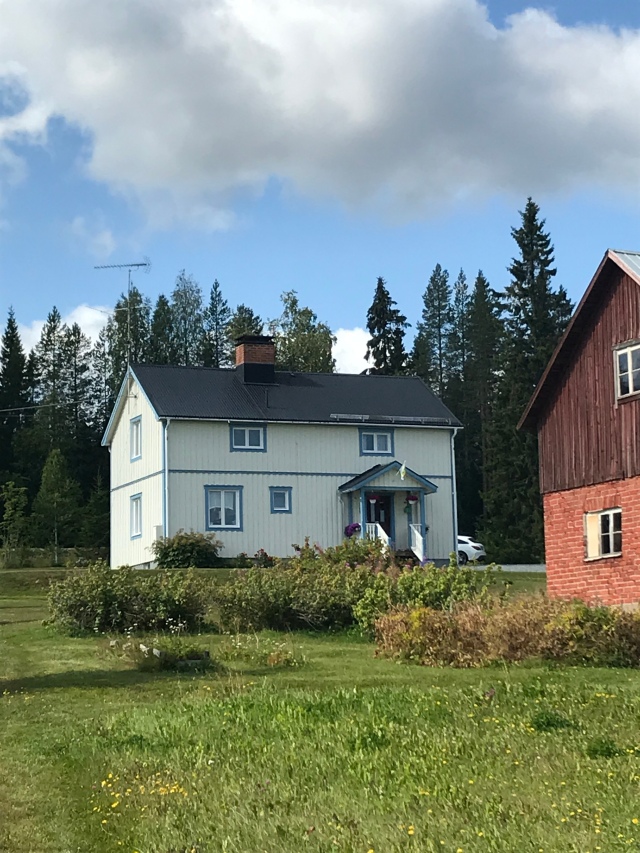 Then we went to Gunnel and Allan’s home which is where Johan’s father Jakob Jakobsson (Little Jakob) lived. But first we had to see the largest birch horn in the world built by their ancestors. It is quite the horn. It was played by Dan and Allan.

Here is the site of Jakob’s home and a remaining lamp and old apple tree. 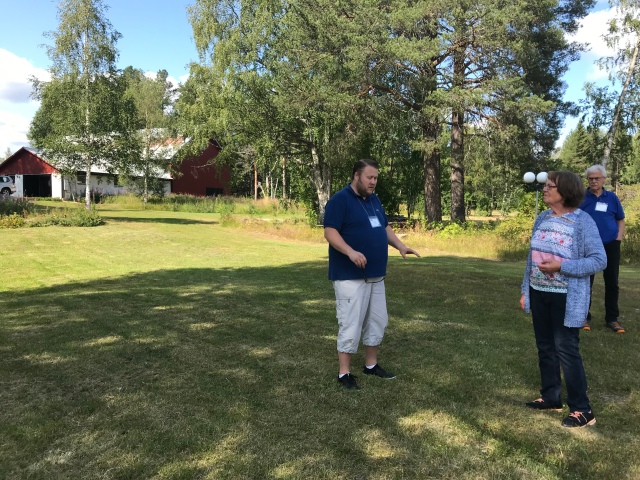 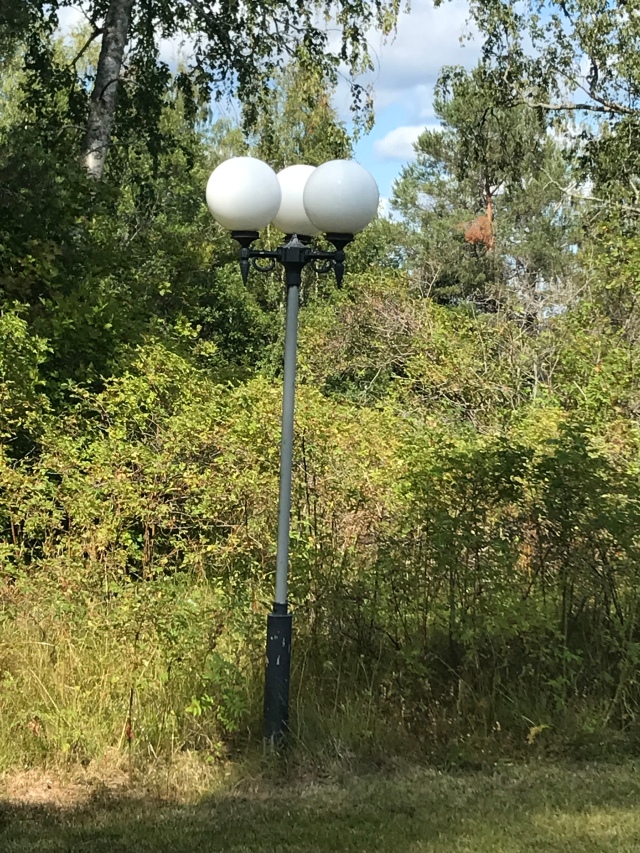 We then continued our Swedish caravan to the Botsmark Bygdegård for a lovely lunch. 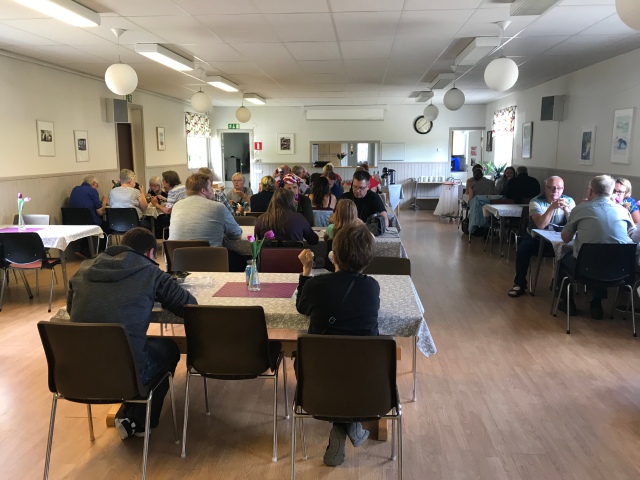 There were maps of how Botsmark has changed. Johan’s farm was on the peninsula on the far right. 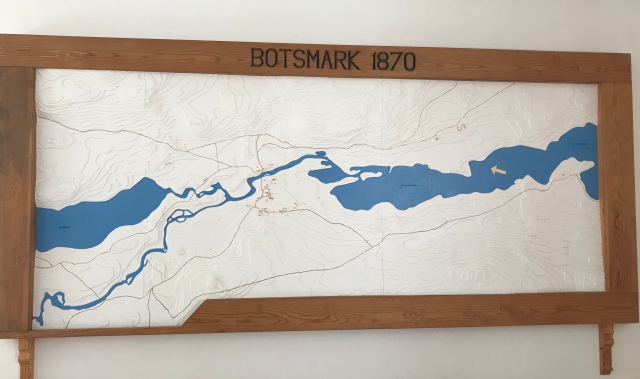 There was also information about a famous annual local cross country skiing race here. Dan used to participate in the 1970’s before he immigrated. 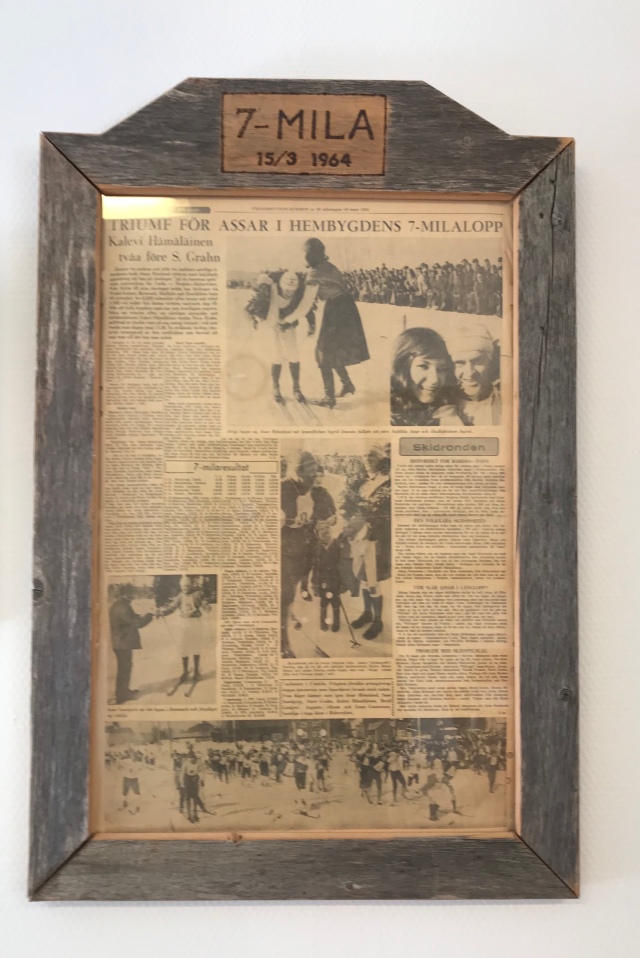 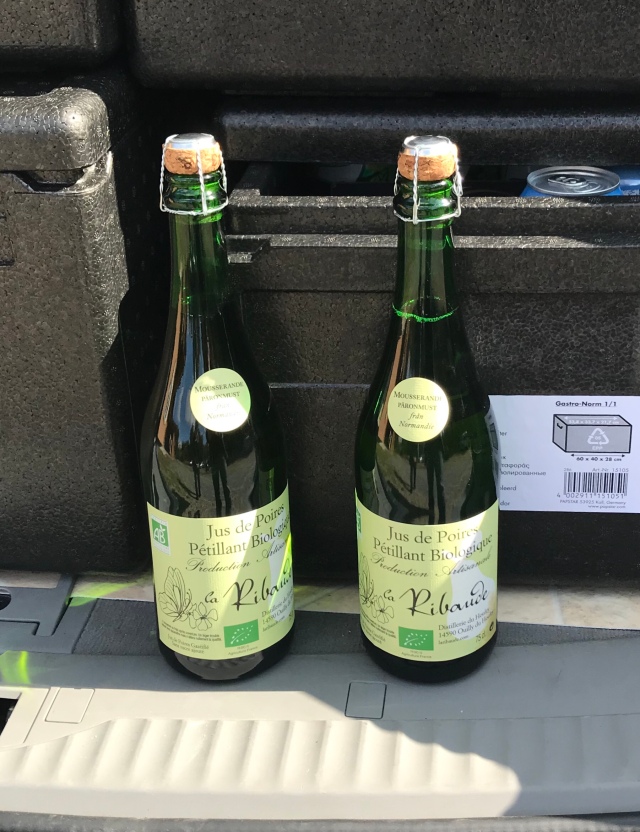 We then went to the site where Johan’s first son Oskar built two houses that both burned down. The second fire also took out the barn that they had just filled with hay for the winter. There is a sign describing the events that I need to translate as well as a small foundation, probably of an out building and a rusty basin. There are huge mushrooms too. 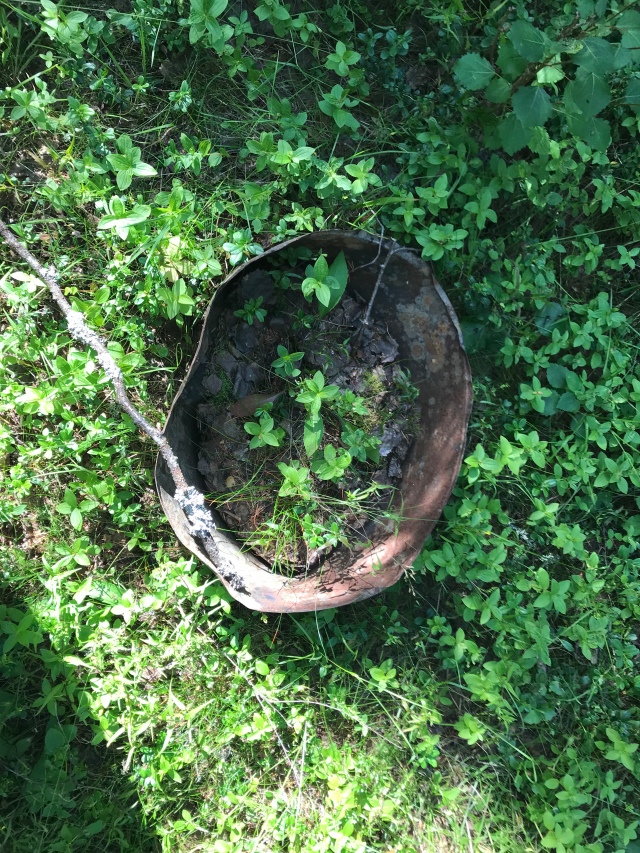 The Swedish caravan started breaking up. I went with some relatives to the Sävar church. Here I found a Zingmark grave for another descendant of Carl Zingmark. Per https://www.svenskagravar.se/ there are other Zingmark buried in this cemetery as well.

Then we came to this gravestone. Oskar’s son Edmund and his wife Birgit Johansson are buried here. But also Johan, his wife Ester, his second wife Hilda, as well as three of Johan’s children Axel, Knut and Erik. They do not have gravestones. 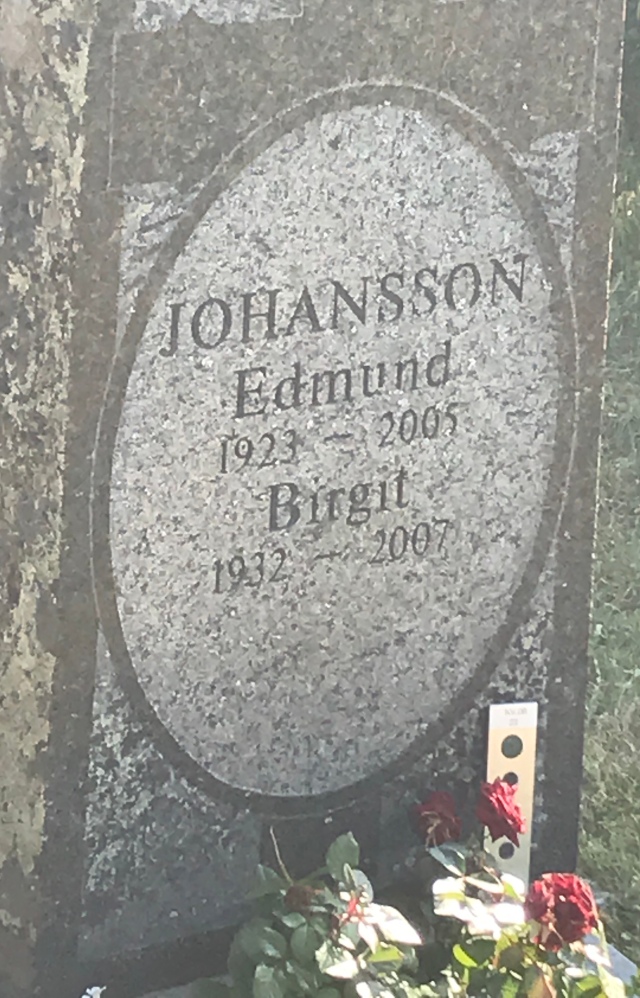 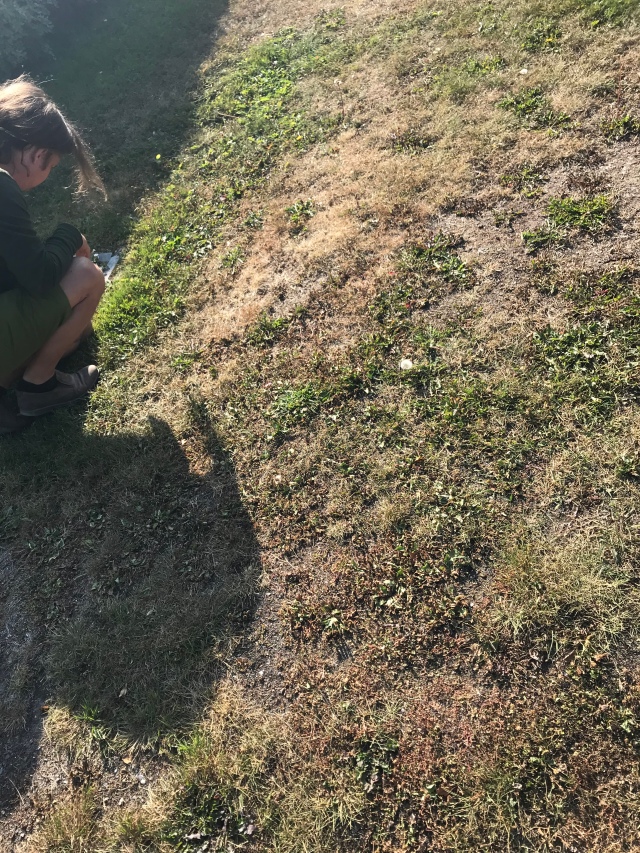 This is Sävar’s church. Apparently the Zingmarks built s replica of this church in Salem, South Dakota.

I met up with my family in Umeå and we went to the Böten restaurant which is actually a boat. The views and food were amazing. 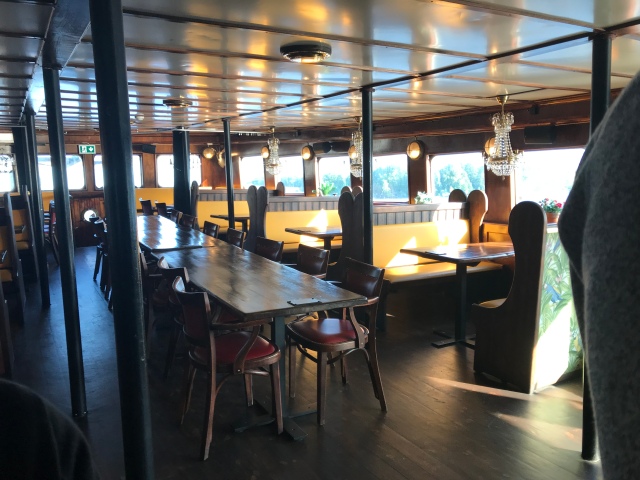 That is it for today. Tomorrow Amy, Mom and I plan to explore Umeå. Craig is going to rest and recuperate. Keith, Kyle and Christina are off to Rome.

This entry was posted in Trips. Bookmark the permalink.