Bird and Coyote (but not cow) News

So I found our missing pea hen today.  She was in what we call the grampa shed behind a wall.  She apparently went back there to lay eggs but got stuck and couldn’t get out.  I will spare us all a grisly photo of this.  Our peacock has been crying out for her frequently.  But I know he was in the grampa shed because he left feathers in there (while retrieving his feathers I found her).  So he must have seen her, but his pea- brain may not put it together that she is not coming back.  Or maybe he is calling for another hen to show up.

I feel bad they maybe I contributed to her death.  She had laid a couple of eggs in the barn, but I threw one away thinking it was a large chicken egg.  I realized before I threw the second one away, but she may have realized it was not a safe nesting spot and went looking for a more secure one.  But it could be the peacock that is to blame as he was breeding her frequently (his sister!), and she may had been trying to hide from him too.

In other peafowl news, our peacock is molting and looking pretty funny.

I am collecting his feathers and will sell them,  50 cents per long one and 25 cents for those less than 30 inches.  Let me know if you are interested.

In chicken news, I had to moved the adopted white chicks out of the feed shed.  They and their adoptive mother have been flying around, pooping on everything and knocking stuff over.  The hen has been laying secretive eggs that I do not want to go rotten.  Plus it is supposed to get hotter, and I worry about them getting overheated in the shed.

So this meant I needed to move the 11 chicks that were hatched in the red bucket out of their pen and into the barn.  They are growing well, almost the size of their mother so hopefully they will do well. 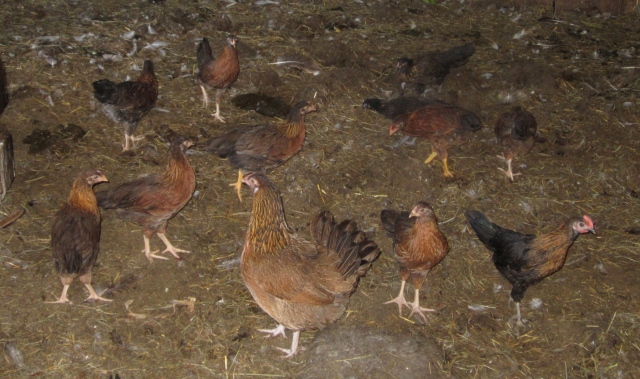 I then moved the two white chicks and their adoptive mother into the pen.  They were initially quite upset but hopefully will settle down.

In coyote news, last evening Tom and I were relaxing on our back porch when we heard one on our back pasture fenceline, quite close.  So Tom ran out their with his gun and shot and killed it.  It was hard to watch and to listen to.  We have not lost a farm animal that we know of to a coyote but they are encroaching closer all the time. Hopefully this will discourage them.

2 Responses to Bird and Coyote (but not cow) News