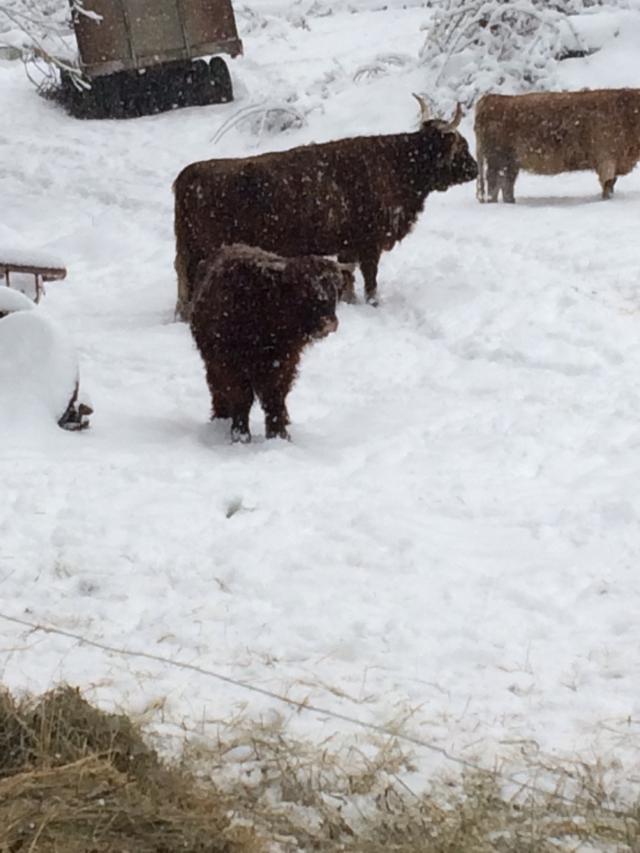 So we have been looking for a Highland bull to breed to our cows.  We found some advertised, and Tom went out to look at them on Monday.  They were in Whatcom County which has been hammered by snow, making travel difficult.  These photos are of the bull he picked out that day.

So today the farmer had him caught in a corral, and we drove out there this morning to pick him up.  There has been more snow in Whatcom county but even more dangerous now it is raining heavily.  So while Tom had to drive on compact snow and ice Monday, today he had to drive on thick slush.  Here is one of the roads.

But we made it, and Tom backed the livestock trailer to the corral gate.  Convincing the ~10 month old bull to stay in the trailer was interesting, but we got it done and travelled home.  Then we let him into our field.  This was not a problem, but he was freaked out, did not see the gates to get to the cows, and end up jumping one fence and one gate to get part of the way there.  He tried another fence with barbed wire but thankfully only scratched his nose in the process.  Finally he went through the last gate, got to the cows and was happier.  Here he is with the cows (and a llama) eating nice hay.

I want to call him Tormund.  He is red, wild, and hopefully interested in large, tough females.  Here he is (with a cloudy lens from all the rain).