So this morning Tom went to check on the chicks.  They were fine at bedtime, but this morning there was a bloodbath and a weasel dancing on the chick warmer.  He tried to hit it with a box to no avail.  So he ran to the house to get his gun.  We ran back to the barn, and I saw the weasel carrying a chick in its mouth heading out of the barn.  I tried to chase it, but it ran under the fence.  Then Tom saw it running back to the chick pen.  He was able to shoot it in the head just as it reached the pen.  The photo above is the dead chicks the weasel left behind, and the photo below is of the dead weasel.

We have been here 15 years and never had a weasel issues.  We have raised chicks in that same pen for years.  But this was definitely our problem this year.  I feel sick putting more chicks in there just to die.  The netting I put up did slow the weasel down, but he/she still found a way.  There are 9 surviving chicks out of the 24 we bought yesterday.  Here they are.

We put them in box on the pellet stove while we figured out a solution.

Tom prepared one of our rabbit hutches for the chicks, making sure that it is nice and secure.  Here they are in their new home. 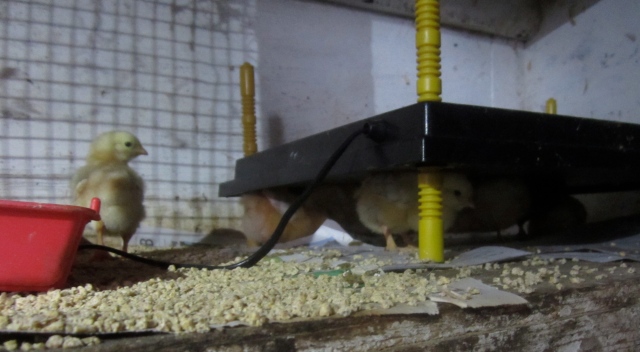 I had to leave for medical appointments while Tom dealt with everything.  In addition, Indy is still not looking good, and Maddie has scours.  So he called the vet out again.  He thinks Indy has mastitis and gave her antibiotics, pain killer and vitamins.  Maddie got antibiotics.  He drenched Indy with electrolyte solution but back at the office he ran her blood, and her calcium and magnesium levels were normal.  So hopefully the antibiotics will help her feel better.  She lets you pet her now, completely abnormal.

Between my appointments I stopped by a pet store to get supplies for my aquariums and saw this.

I had to buy Steve a weasel toy.  Hopefully this will help teach him to hunt them.