We had great plans to drive and then snowmobile to our mountain trailer to celebrate Tom’s birthday.

But things did not go as planned. The first is that Tom’s snow machine is in the shop. It was supposed to be ready but wasn’t. So he arranged to rent one.

Then I was supposed to have everything packed and ready to go, including his birthday cake. But I was too exhausted from work to do that so was packing the morning we were supposed to go.

Then the pass was closed. So we took the long way over two other passes. We finally get to the bottom of the mountain, and it was sheet ice and gravel on the road. We decided not to take the truck but taking the snowmobiles proved difficult too. We ended up burning the belt on my snowmobile and dropping the cooler on the road, breaking most of the eggs.

When we got to our trailer finally after dark the solar system was not working so we had no power. The vintage Coleman lantern did not work either. So we strung up some battery operated party lights, lit some candles. and used head lamps to see.

We started a fire in the wood stove for heat.

I proceeded to make Coconut Layer Cake. I had no power though to run the mixer I brought so I had to do it all by hand. We were a little short on eggs but I got by. I also had to adjust for altitude. The cake ended up cooking well but seemed to flop on cooking likely due to being at 4000 feet.

Then we started dinner. The baked potatoes took forever as did the steamed green beans. There was a grease fire in the grill so the steaks were charred. We finally we able to sit down and eat dinner at 9:50. 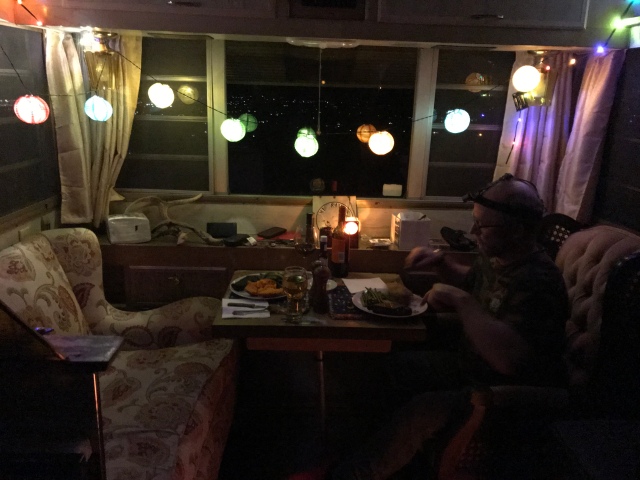 Then he opened his presents. I messed up there too. I got the wrong rootstock for his barefoot apple trees. And the 12 volt TV did not have a car adapter to work on our solar system and did now have an internal antenna either. Then Tom blew out the candles on his cake. 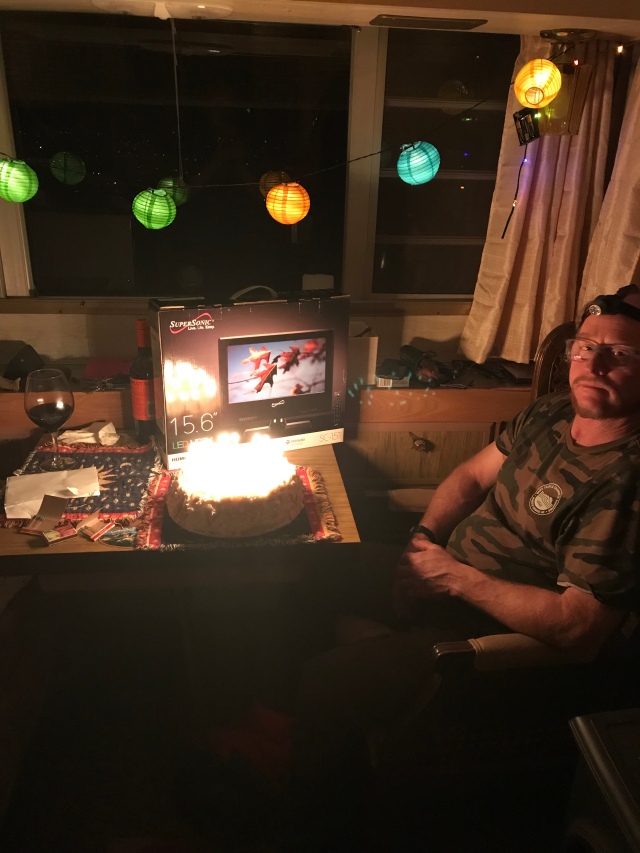 Toasted coconut flew everywhere. Despite its issues, the cake tasted good. A little too much frosting but other yummy and quite coconuty.

So what Tom had earlier called “the trip from hell” ended up on a positive note. And I am guessing we are going to remember this birthday.

This entry was posted in NYT Cooking recipe, Trips. Bookmark the permalink.