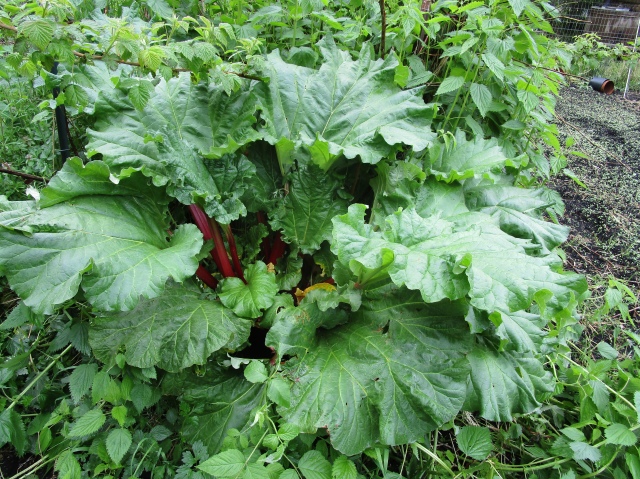 Here is our rhubarb plant in our garden.  I had already harvested two large stalks before I took this photo.  It was given to me by my friend Erin after Tom had weedwhacked our previous one.  This one has a protective barrier around the base to prevent similar tragedies.  It is surrounded by raspberries and nettles.

I figured it was time to start eating some rhubarb.  Two days ago I was up at 4 AM due to my  illness and decided to make Rhubarb Muffins.  I found this recipe and baked them quietly.  When Tom got up there were fresh muffins for breakfast. 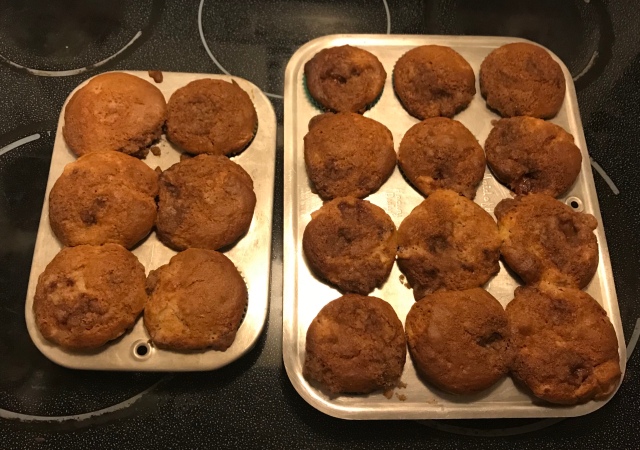 I used to live in Wallingford in Seattle.  There I would occasionally walk one block to Julia’s and buy a rhubarb muffin for breakfast.  These muffins were amazing.  I have tried to replicate them in the 30 years since, but this is the closest I have found.  They have enough rhubarb in them to notice and the nice topping.  Next time I am in Seattle I should stop by Julia’s and see if they are still making those rhubarb muffins to see how close I came.

Last night for dinner I used the Skillet Chicken with Rhubarb recipe to make dinner.  I substituted turkey breast for the chicken though.  Here it is all cooked up.

This is a surprisingly good dish.  The rhubarb and onion pair really well with the turkey (Tom says he prefers the chicken to the turkey, but I disagree).  So we still have lots of rhubarb left.  I think I will freeze it, and in the coming months we can make both of these recipes when the mood strikes.