Chicks have been raining down from the hay loft again.  One day there was a black one cheeping loudly in the barn.  I could not figure out who its mother was so I put the chick under a hen in the loft on only one egg.  She seemed to accept it so I move the hen, chick and unhatched egg to one of the rabbit hutches.  After this the hen was paying more attention to the egg than the chick.  So I moved the egg to another setting hen I found.  The next day there was another black chick on the other side of the barn.  I moved it under this hen, and she seemed to accept it.  Unfortunately one of these chicks subsequently disappeared so there is only one now under this Leghorn hen.  You can see the remaining chick barely peeking out the right side.

Then the next day Tom found a hen sitting on a bunch of chicks under a rabbit hutch in the barn.  They were not there the day before so presumably they rained down from the hay loft too, and she followed them.  I suspect she is the mother of the original two chicks.  Tom moved them all into a rabbit hutch to protect them.  Here is the mixed-breed hen, but you can only see one of the 9 chicks. 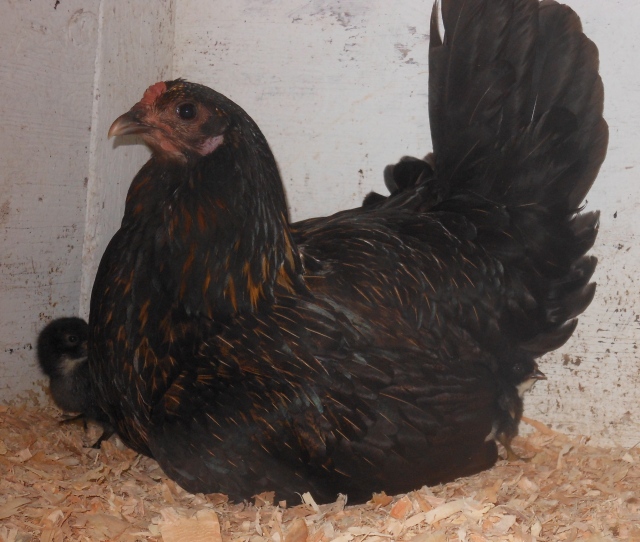 In this photo you can see a few more chicks and some chick legs under her.  You will just have to believe me that there are 9 chicks.

In other news, it is definitely cider season.  Here is our back porch now until the season is over.

Charlotte still likes to be scritched.

And Maddie is really growing up fast.