So this is our Swedish dinner from Tuesday evening.  I gathered the ingredients.  I was so proud of myself because I thought I found vanilla sugar finally at the local Europe Foods.

It was labeled as such but when I got it home, it did not taste like I would expect.  From what I could tell from googling in Russian the Preston vanilla sugar should look different.  So I ended up just using sugar with 1/8 teaspoon of vanilla extract instead.  Someday I will find vanilla sugar!

So this was for the Princess in a Cupcake recipe.  This is the cupcake version of the Princess Cake (prinsesstårta) popular in Sweden.  It turns out it probably would have been easier just to make the cake.  I started with making the cupcake batter and baking cupcakes in paper liners.  I then had to figure out how to make the vaniljkräm.  So I googled and found a recipe in another Princess Cake (prinsesstårta) recipe (the one I probably should have used).  I let the cupcakes cool and cut them into three layers.  I added Danish raspberry spread between the bottom and middle layer and then added the vaniljkräm between the middle and top layer.

I put whipped cream in domes on the top as best as I could.  I colored and kneaded marzipan for a while, rolled it out and cut it into squares to try to cover the cupcakes.

At this point they are not looking good, and I need a Swedish drink.  So I made a Polar bear cocktail (Isbjörn eller Blue Lagoon).  I was tired so just used raspberry lemonade powder for the lemonade.

It was not great, but it did use up some of the blue curaçao leftover from the Seahawks Super Bowl party.  Plus I took a bath at this point.  Afterwards I tackled the Jansson’s Temptation (Janssons Frestelse) recipe.  I only put the anchovies on the right since Tom is not a fan.  And I only used 4 russet potatoes as the pan was going to overflow otherwise  Here it is all cooked up. 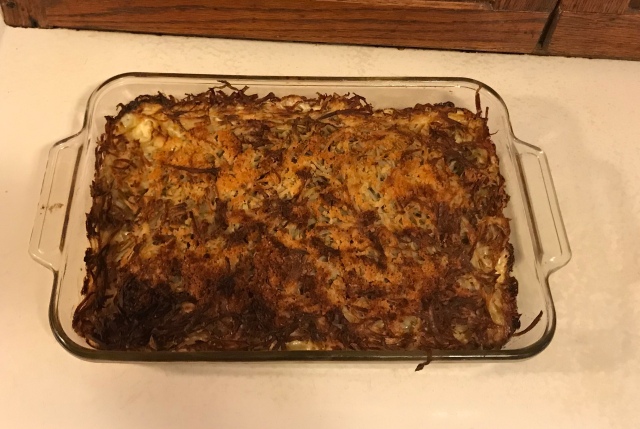 Then I made Oven-Baked Pancake with Leek and Bacon (Ugnspannkaka Med Fläsk).  I used our bacon for this.  Here it is all cooked.

Then I “finished” the cupcakes.  I tried to make the green marzipan look good.  I made pink marzipan rosebuds (that actually looked OK) but then I dumped too much powdered sugar on top. 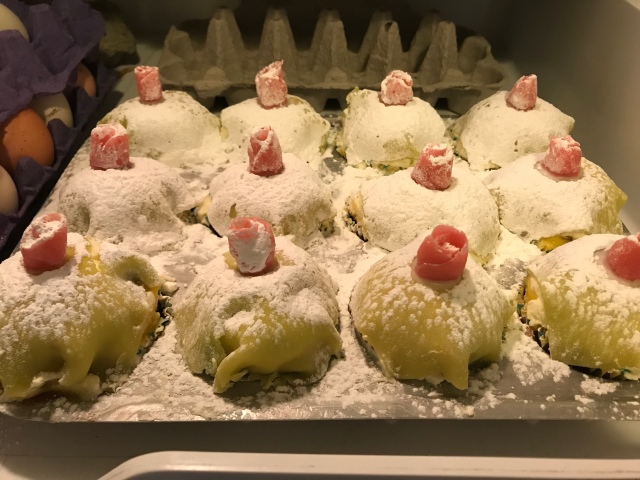 Here is the Temptation and Pancake on my dinner plate.

And here is my pathetic cupcake.

The Temptation was good, and I would make it again.  I loved the hint of anchovy in it.  Tom even like his portion without the fish in it.  The pancake was kind of eggy and boring.  I do not think I will make it again although it as better the next day as a leftover, so maybe?  The drink I will not make again. And probably not the cupcakes either. They tasted good but looked very amateur.  Tom thinks they look like green breasts which I have to agree with.  If I ever get ambitious again I might try a real Princess Cake.  I knew they did them on the Great British Baking Show.  So I might want to  watch that episode again if I were to try it.  Plus a local friend of mine made one in January.  I might get some tips from Denise too.

This entry was posted in Swedish food. Bookmark the permalink.