We bought him as a buck in March 2011.  He had been living on a farm near the Rouge River and a cougar had attacked the goat herd and killed all of the goats except Bumble and one other.  Bumble had a torn ear from the attack and an injured hip so always limped a little.  But he was a striking buck with beautiful blue eyes and was polled.  His official name was Victory Caprines XS Bumble-Bea, but we just called him Bumble. 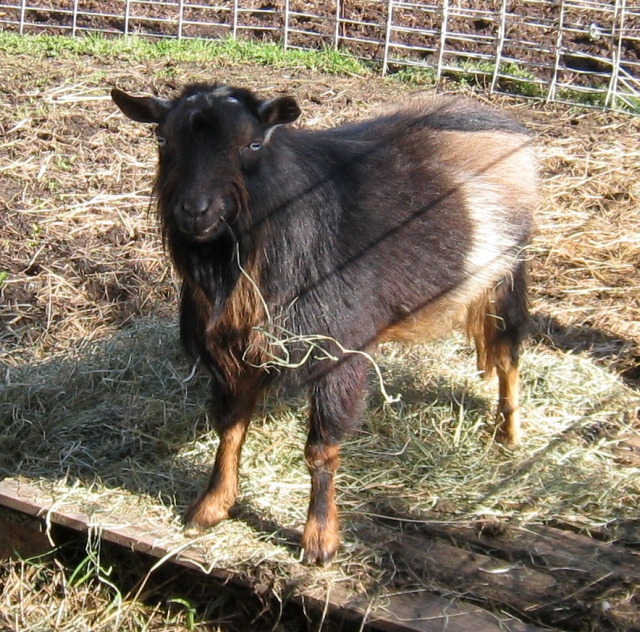 He was initially in with the llamas but kept escaping, getting to the does. 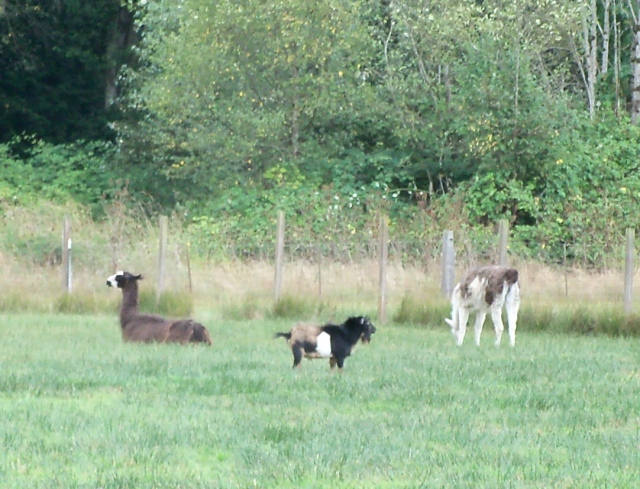 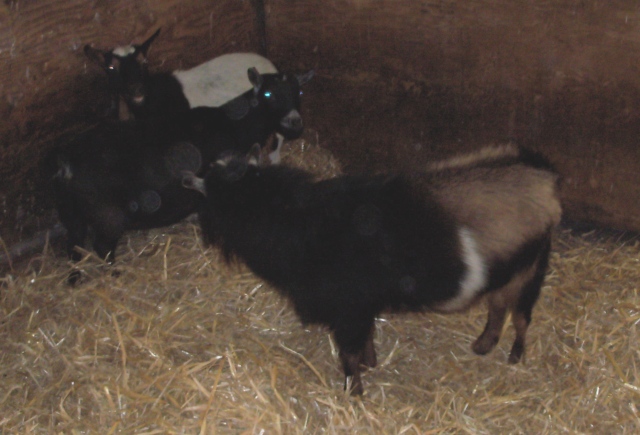 We also had people bring does over to breed with him.  That autumn there was Cobalt, Ruby Tuesday, Jade, Violet and Cinamin.

In November Patches had Pisqually and Petunia. 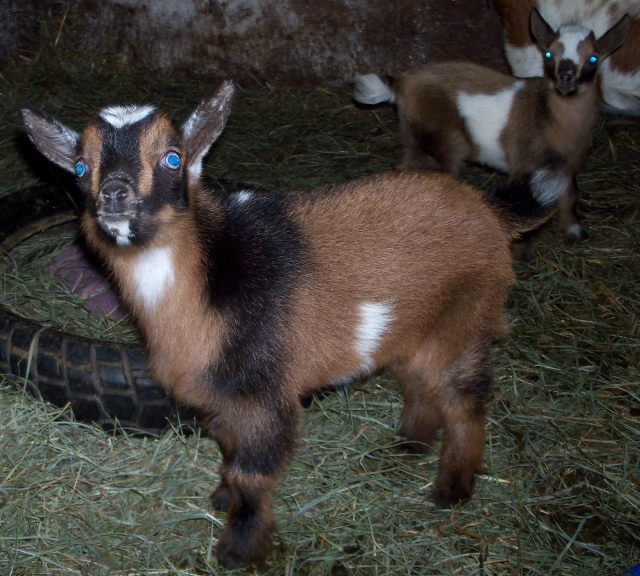 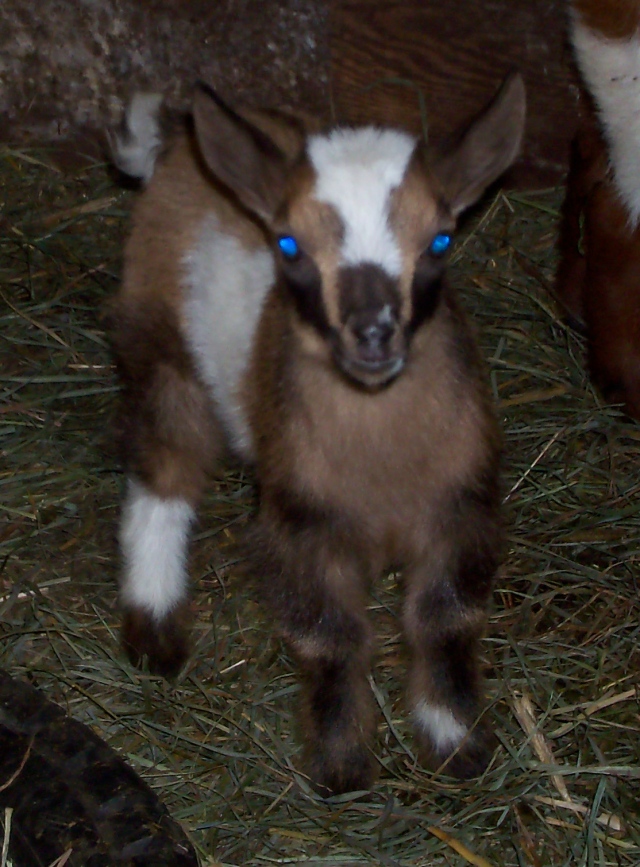 In March Saphie had Cisco Kid, Suzuki and Sarsaparilla. 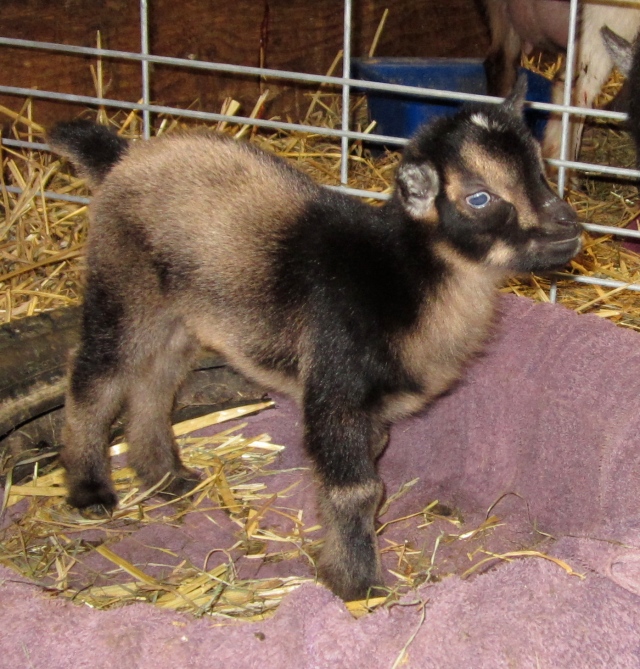 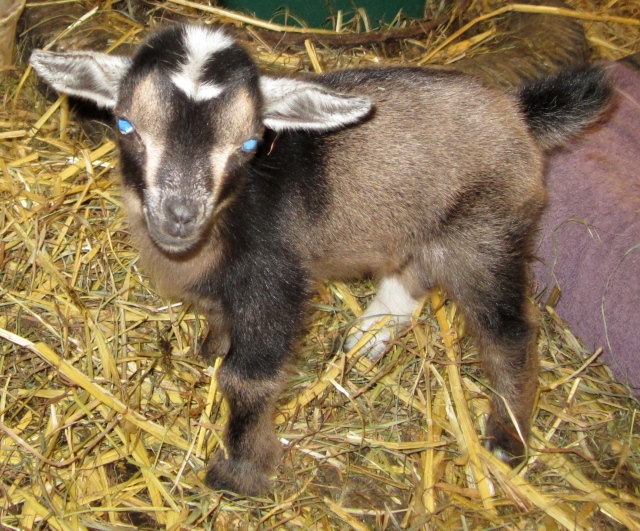 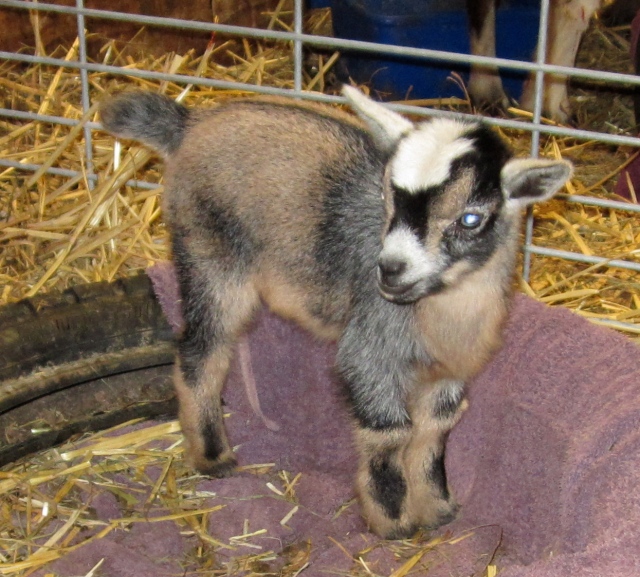 Later in March Magpie had Mavis and Moglee. 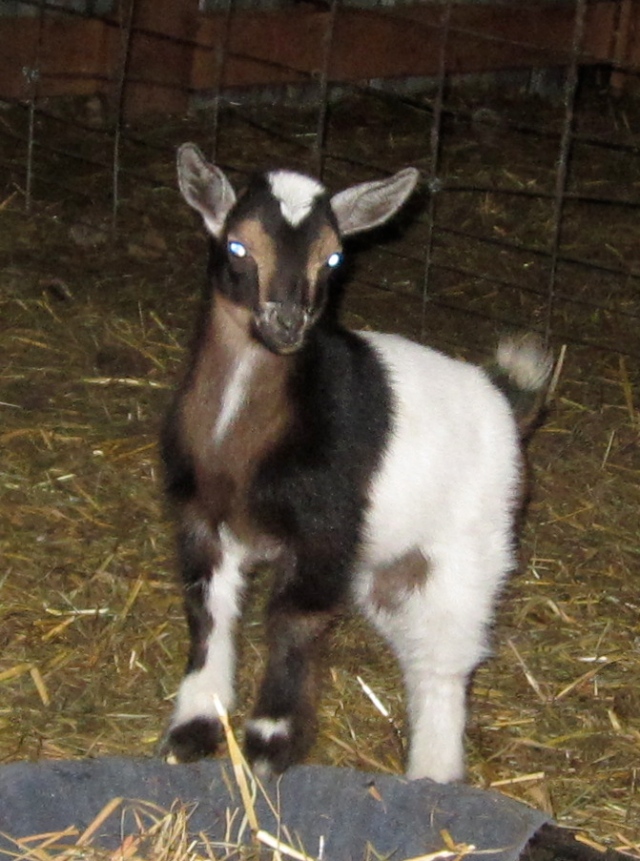 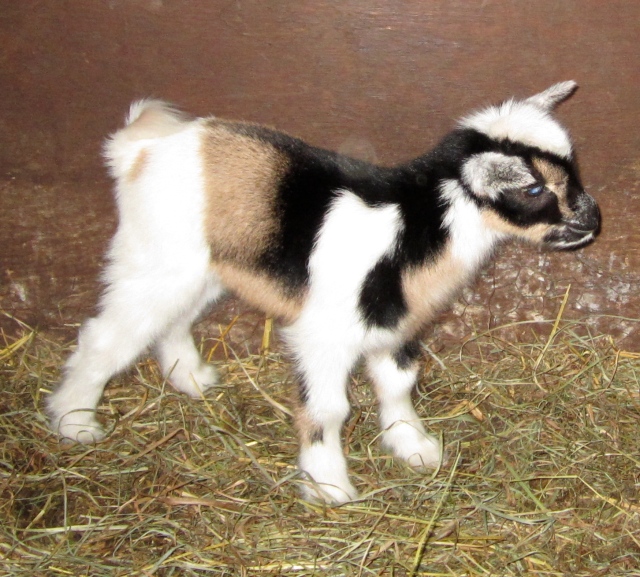 We sold all of the kids except Mavis who we kept.  We keep asking ourselves why as she has an awful personality unlike either of her parents.

Bumble then got to rest with his fellow bucks until August 2012. 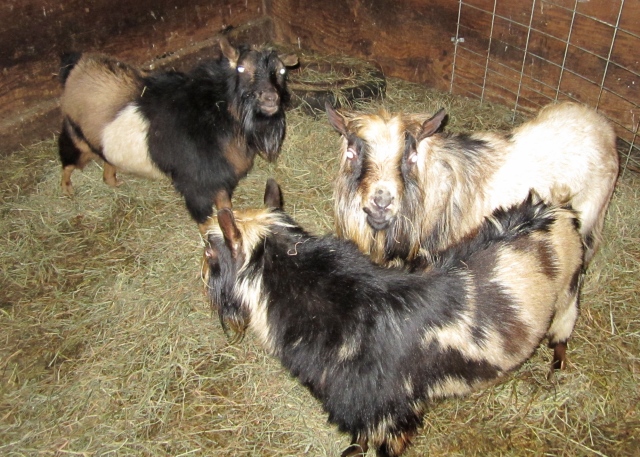 In August Valentine was brought over for breeding.  In October he was in with our Peewee and Shorty. 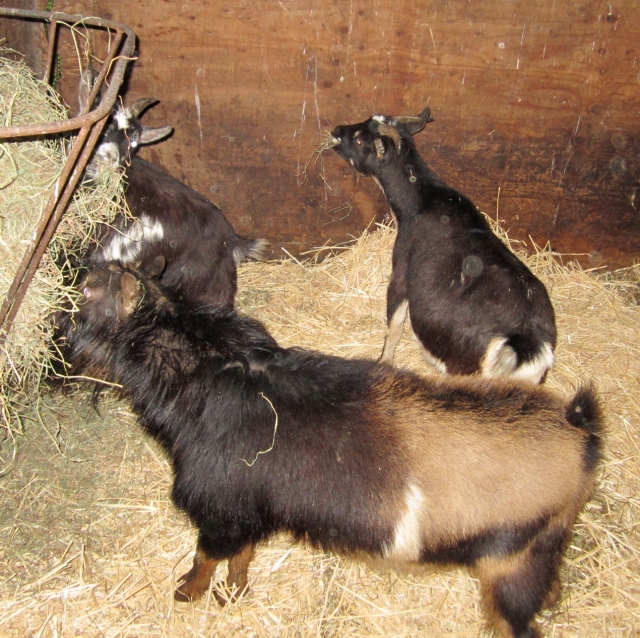 In November and December Gretchen, Pippa, Sera, Topsy and Edelwiess were brought over for breeding. 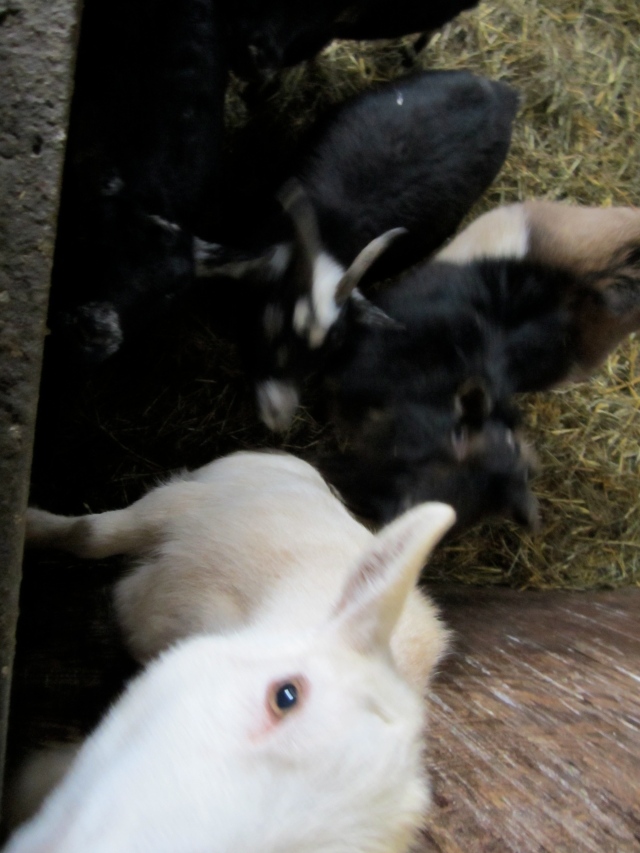 After that he started having hoof scald and rot issues that I was never able to completely eliminate.

In February we found out about the animal abuse and neglect that happened to 3 sheep and 3 goats that we had sold.  It broke my heart, and we decided immediately to stop breeding.  Four days after we picked up Gertie and Wiki from the rescue (Queenie had died) we had our bucks castrated by the vet with sedation. 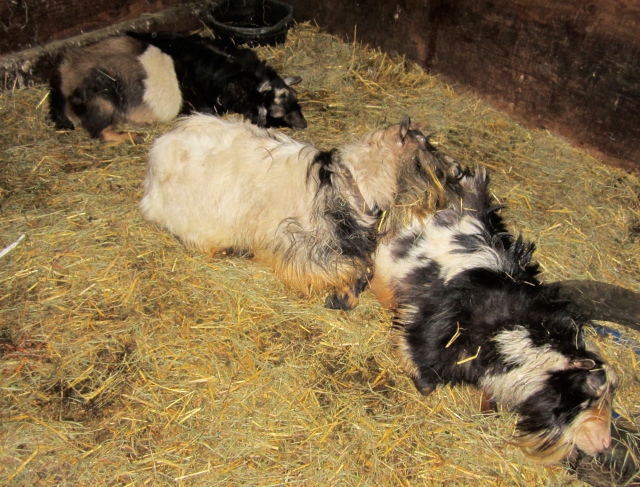 In March Peewee had Al and Pacino. 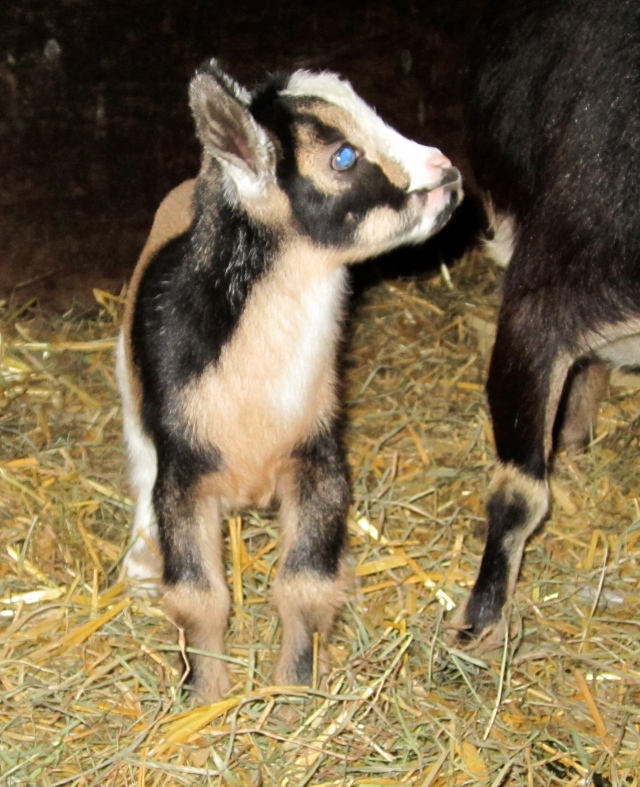 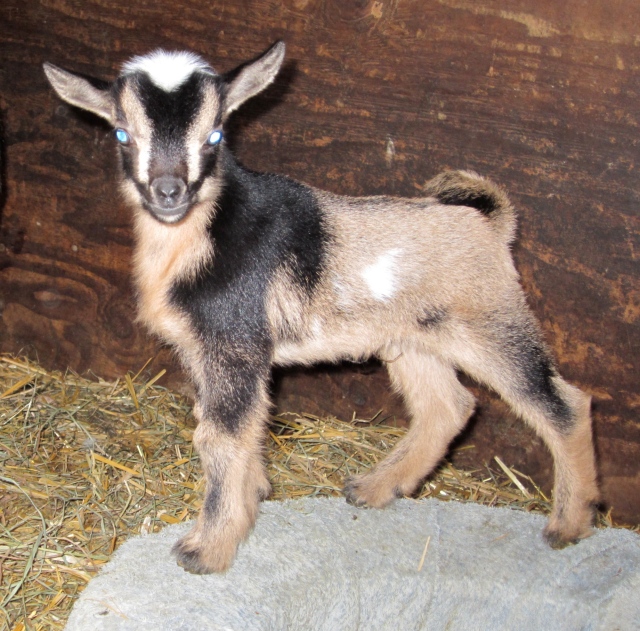 In April Shorty had Velma and Scoobie. 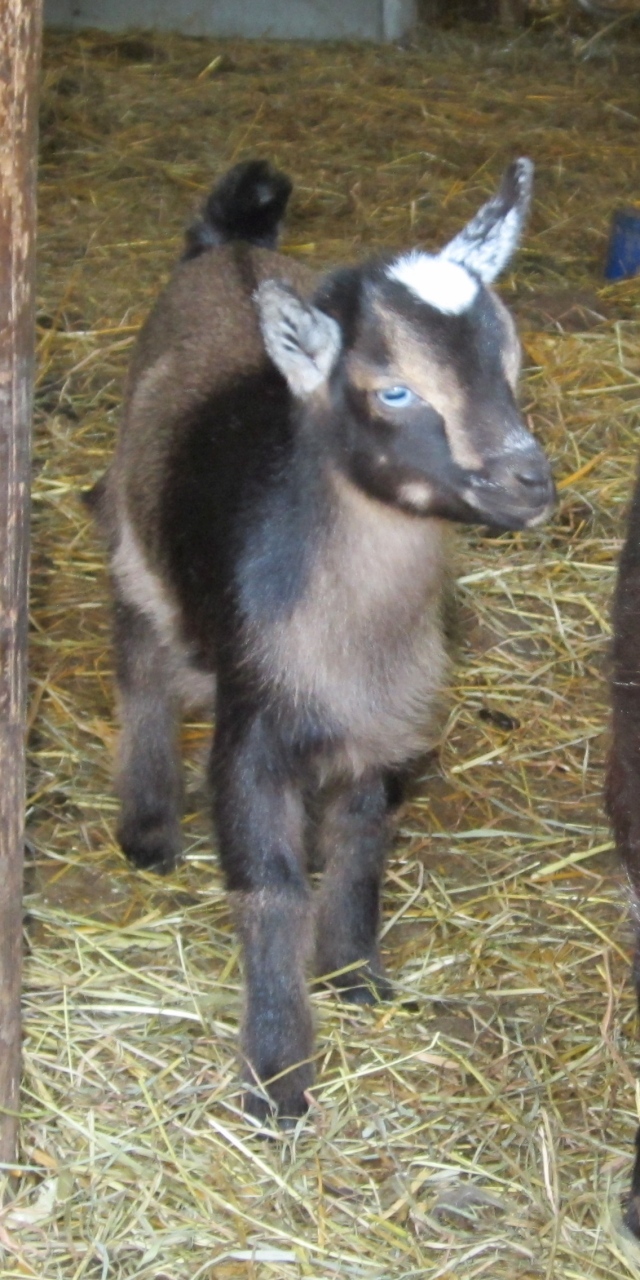 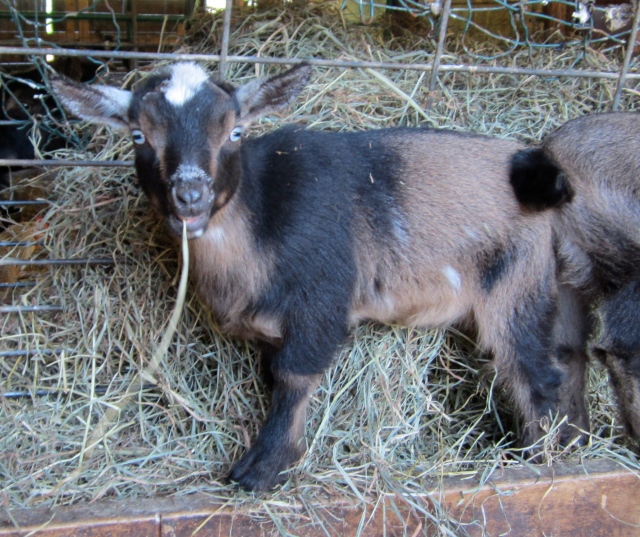 I did not receive photos of Bumble offspring from the visiting does except here are Pippa’s kids from him. 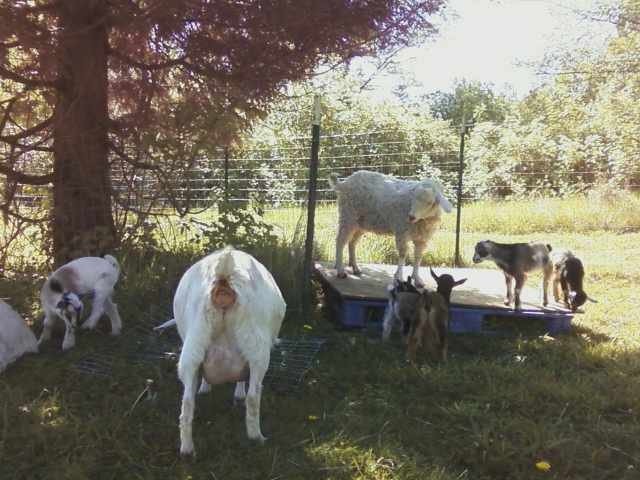 After castration he became a wether just hanging out on the farm.  But he was a cool goat, never causing any problems.  Plus he was nice and since he wasn’t peeing on himself anymore, he was much nicer to pet. 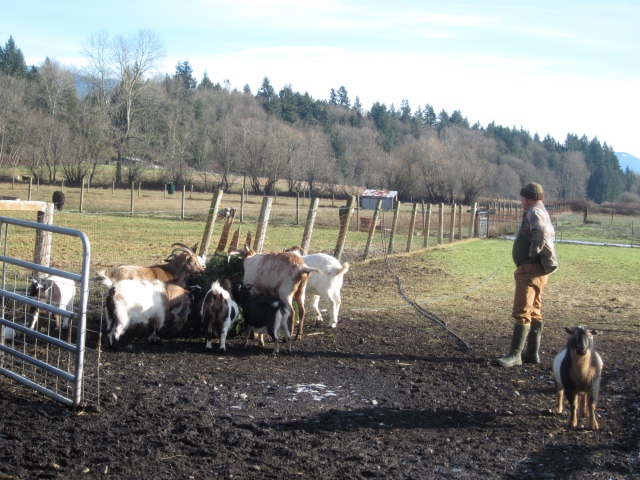 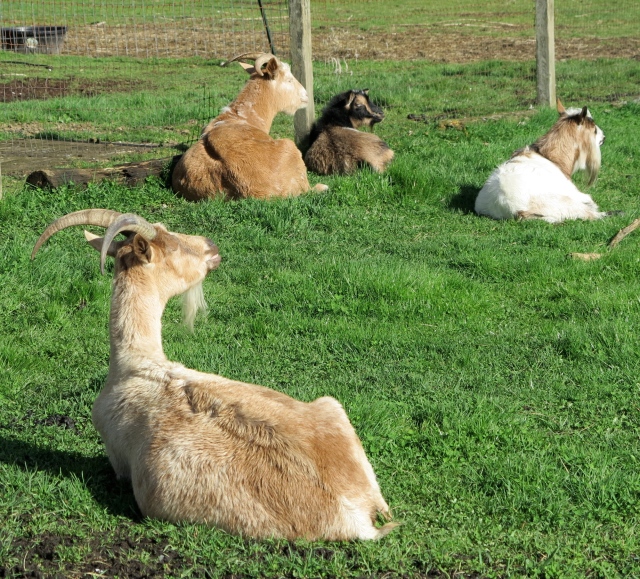 He became ill last July with poor feeding and a bloated abdomen.  After $1000 worth of veterinary treatment he recovered but never had a clear diagnosis.  Here he is back home. 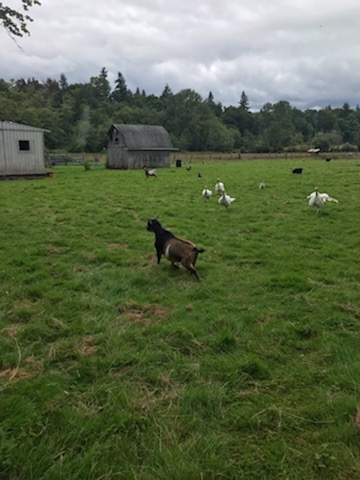 And one month later. 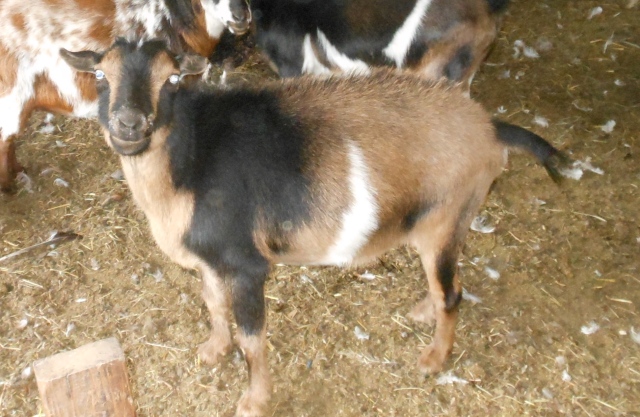 But then two days ago after Tom was doing the chores he commented that Bumble wasn’t eating much.  We figured he was cold.  When I went to check on him, he was basking in the sun and seemed fine, but he had become quite thin just since I checked him on 2/11.  He wasn’t bloated though.  So I figured he was cold and got a heating pad ready for him for the night.  But yesterday morning he was laying in the doorway of the barn, not looking good.  I was petting him to say goodbye but then he rallied and stood up.  I moved him to a pen with sunshine.  I could not get him to eat or drink so I left him in the sun to discuss with Tom what to do.  I figure we had to warm him up to see if we could get him to eat.  We decided to move him to the trailer and warm it up with the wood stove.  I got a fire going and supplies ready.  Once it was warm we moved him out there.  He walked most of the way but needed help getting up the stairs.  He hung out near the fire and gradually warmed up.

Then he seemed perkier and wanted to drink.  He drank a lot of water but also started having diarrhea.  I had hopes that he was improving.  On two of my hourly checks he seemed to be better.  Then the next one as I petted him he laid his head down to sleep.  And then on the next hourly check he was dead.

He is going to be missed.  He was tougher than nails as well as Mr. Cool.  I always second guess myself when an animal dies and now I am again.  But now we need to bury a beloved goat named Bumble.